Why the Best Leaders Embrace Vulnerability? 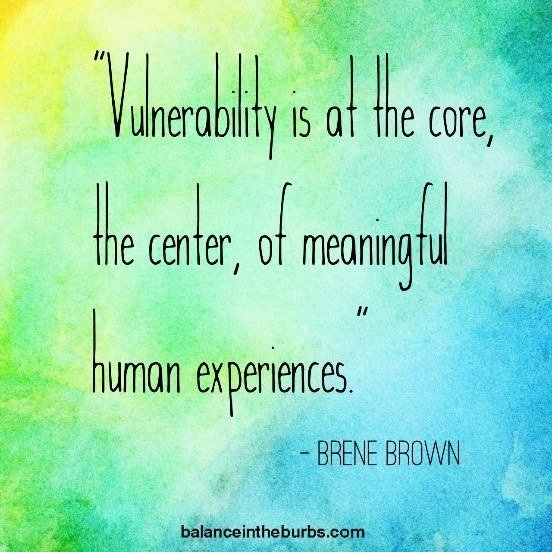 Brené Brown, an expert on social connection, spent a decade researching the attributes of people that form the deepest relationships with other people.  Four common themes emerged among the thousands of interviews that she conducted with people who were most successful connecting with others: courage, connection, compassion, and vulnerability.

Brown’s famous Ted Talk on The Power of Vulnerability is about why people need to fully embrace their vulnerability.  She says people who have deep connections with others believe that “what makes them vulnerable makes them beautiful.”  When leaders are secure enough to step forward and say…you know what I am not perfect, and here is why…this makes it safe for others to be their own authentic selves.   You need to be your authentic self to forge a deep connection with another human being.  This equally applies to relationships in the workplace.

Leaders live in a fish bowl.  Employees scrutinize what leaders say and do, and the values they demonstrate every day. It is not a wonder that most leaders put up a pretense and rarely let their guard down. However, it remains constant, people absorb your energy and can tell if a smile is real or fake.   Even on a subconscious level, your inner state resonates with people, and they feel uncomfortable if you are out of balance and not in a good place.  If you are out of sorts and do not communicate, what is wrong and pretend everything is okay, people can subconsciously sense something is not right.  This makes them trust you less, because while they may not be able to quite place their finger on it…they sense when something is ‘not right’.

A comfort level with making yourself vulnerable is a leadership quality rarely witnessed in the workplace.  People are deeply uncomfortable being vulnerable in general – it is scary.  It involves risk, and often a fear that we will not be “good enough”.  However, the research shows the opposite.  Those that feel most worthy of social connection are those that make themselves the most vulnerable regularly.

By making yourself more vulnerable at work, your team will feel safer to speak up when a mistake is made, and even better, they will more readily ask for help.  Leaders need to embrace their own vulnerability.  This communicates to their team that there are no unrealistic expectations of perfection.  Vulnerability is not a weakness, it takes a strong person to make themselves vulnerable. It makes us all more capable and our organizations benefit as a result.

Hubbl, a start-up in Bangalore, South India, founded by Archana Patchirajan, was featured in a Harvard Business Review article talking about the power of vulnerability.  One day, every founder’s worst nightmare came to fruition. Archana had to tell her staff that she could no longer  pay them as the company was out of money.  Her staff wouldn’t have it.  They told her that they would rather work at 50% of their pay than leave her; and a few years later, Hubbl sold for $14 million.  When employees were asked why they continued to work for Archana  a few themes emerged:

Archana differentiated herself from the competition by embracing vulnerability and gaining the trust and respect of her team.

“Vulnerability does not mean being weak or submissive. To the contrary, it implies the courage to be yourself. It means replacing “professional distance and cool” with uncertainty, risk, and emotional exposure. Opportunities for vulnerability present themselves to us at work every day. Examples Brown gives of vulnerability include calling an employee or colleague whose child is not well, reaching out to someone who has just had a loss in their family, asking someone for help, taking responsibility for something that went wrong at work, or sitting by the bedside of a colleague or employee with a terminal illness.”

(Emma Seppala,  HBR: What Bosses Gain by Being Vulnerable December 2014)

Are you a leader that embraces vulnerability?  Try it out….you might be surprised by the impact you have on others lives including your own.